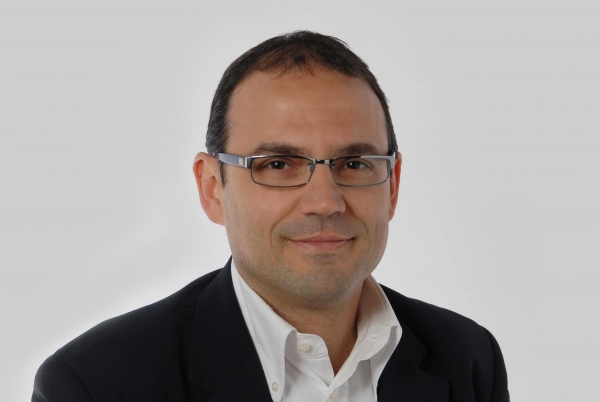 Competence, passion and honesty are essential aspects to the successful of own job.

His real estate career begin in 1995 in an agency in the east of Verona, initially as marker researcher and later alongside the owner, maturing a good experience.

In 1999 accept to work in quality of real estate agent in an real estate agency of Valdagno (VI) belonging to a group in franchising becoming in 2000 a member holder. In 2002 opens a second agency in Vicenza creating a good team of work of which he open other two branches and begin to hold a position within the Franchise Consulting.

In 2006 after an experience maturated in the sector he decided together his current associate Nicola to open Scaligera Immobiliare, situation today solidified with principles and methods maturated in all this years, situated in Caldiero covering all the east area of Verona.

In 2011 he opens a branch of Scaligera Immobiliare in the inner city of Verona, continued to guarantee the efficiency and profesionality.

A few steps from the center of Roverè Veronese, newly renovated apartment, in a green and quiet area. The apartment consists of a living area with kitchenette, two bedrooms and a bathroom with window. The cellar completes the property. Availability of separate single or double garage. Ideal solution as a holiday home.

In the rural courtyard, nestled in the hills between the Val d 'Alpone and the Val di Chiampo, we have a terracielo in the common courtyard, consisting of a living room, with separate kitchen and an outdoor area of about 25 square meters. On the first floor two large bedrooms and bathroom with window, on the second floor two bedrooms with the possibility of obtaining the second bathroom. The property is in an excellent state of conservation that can be used immediately, it is equipped with a predisposition for a heat pump heating system in addition to the wood stove located in the living room. Ideal as a second home to spend moments of pleasant relaxation surrounded by nature.

Inside a new subdivision that will arise a few steps from the center, we offer a large terraced house free on three sides, with independent entrance and private green area. The portion is spread over three levels and is composed, on the ground floor, of an entrance to a large living room with kitchenette and dining area, bathroom with window and anteroom, laundry room and exit to the garden with terrace; on the first floor three bedrooms, one with walk-in closet and private bathroom, another bathroom and two balconies; in the basement large cellar / tavern of over 30 square meters, double garage. The units are designed to guarantee the highest quality standards in terms of anti-seismic and acoustic, certified by qualified professionals. The whole complex will be highly energy efficient, designed to offer comfort and convenience, characterized by large private spaces and a convenient location to the main services but at the same time inserted in a recent quiet residential area. ESTIMATED DELIVERY 2023.

Verona - Vestenanova
- House in a court-yard

In the rural courtyard, nestled in the hills between the Val d 'Alpone and the Val di Chiampo, we have a terracielo in the common courtyard, consisting of a living room, with separate kitchen and an outdoor area of about 25 square meters. On the first floor two large bedrooms and bathroom with window, on the second floor two bedrooms with the possibility of obtaining the second bathroom. The property is in an excellent state of conservation that can be used immediately, it is equipped with a predisposition for a heat pump heating system in addition to the wood stove located in the living room. Ideal as a second home to spend moments of pleasant relaxation surrounded by nature

- DELIVERY 2023 Caldiero, loc. Bambare, located in a totally residential area, convenient to the main services and communication routes, in a complex of six units, ULTIMA VILLETTA D’ANGOLO is available as follows: GROUND FLOOR: independent pedestrian entrance onto a private garden, large living area with adjoining dining area, with separate kitchen (possibility of dividing the two rooms) with exit to the outside on a covered porch and garden covering the three sides of the building, hallway and bathroom al FIRST FLOOR: three large double bedrooms, one of which with private bathroom, second bathroom and three terraces. BASEMENT FLOOR: cellar / basement of over 45 square meters, technical room and garage of 85 square meters - (Type No. 1) -The internal images are renderings for illustrative purposes made to scale on the actual dimensions of the spaces OPTIONALS AND FINISHES PRESENT ON THE PROPERTY INCLUDED IN THE PRICE: - PERSONAL photovoltaic system (3 kw) -Heat pump for heating and cooling - Underfloor heating - 12 cm outer coat -Autonomous heating -Security door - Color video intercom -Electric velux with rain sensor in the bathrooms -Aluminium blinds -External pvc windows with double glazing -Interior finishes according to the taste and pleasure of the customer -Preparation for air conditioning in the living / sleeping area -External flooring in Lessinia stone -Automatic gate - Barbecue area with chimney -Preparation of the perimeter alarm system on each window - Anti-seismic structure - Tax deduction on the cost of building the garage

Verona - Selva di Progno
Sale - House in a court-yard
In a panoramic, residential and served area, we suggest a complex consisting of two units in a common courtyard, with private entrances for a total of approx. 140 square meters. with a large portion of land.

The units are in excellent condition, they consist of a living room with kitchen on the ground floor and  two bedrooms and a windowed bathroom on t

Ideal as a second home, for several families.

Pieve di Colognola ai Colli, in a residential area and surrounded by vineyards overlooking the hills, we offer a splendid allotment with availability of a plot of approximately 1076 square meters and 900 cubic meters. The lots are ideal for single and two-family villas for those looking for solutions with large indoor and outdoor spaces, or three-family solutions with large apartments, independent entrances and private gardens

In an ancient noble villa, dating back to 1700, we offer a fine residential solution. The unit, located inside one of the two towers of the property, is spread over three levels. Elegantly renovated and furnished, it comprises on the ground floor a beautiful outdoor patio, spacious entrance, eat-in kitchen complete with appliances, bright living room and bathroom with window. Upstairs double bedroom with large private bathroom, second and last floor second double bedroom with third bathroom. Private entrance, no parking space but possibility to park the car externally near the entrance.

In a quiet and green setting in the San Vittore area, we offer for sale a single house with a small private, fenced courtyard. The property needs renovation and modernization interventions. The unit, free on four sides, consists of entrance to living room, separate kitchen on the ground floor, room currently used as cellar / laundry room on the mezzanine floor, three double bedrooms on the first floor and bathroom with window. Private courtyard with single garage with tilting door, semi-closed and covered porch / parking space. Adjacent to the house is another room for storage use with a room on the first floor, all with access from the courtyard (possibility of internal connection with the main building).

In the splendid setting of Colognola ai Colli, we offer a central terraced house with a breathtaking view. The property comprises on the ground floor a large living room with kitchen and bathroom with window, on the first floor a double bedroom, single bedroom, double bedroom, bathroom with window and closet. In the basement there is a double / triple garage, a tavern of about 20 square meters and a third bathroom. The private garden, in front of the house and on the back, completes the real estate unit. The property is currently in its raw state, therefore it lends itself to any changes based on housing needs.

In a quiet area and very close to the center, we offer a portion of a terraced house, with an independent entrance. Currently the property consists of a south facing terrace, large living room, kitchen with exit to the north terrace, directly connected to the green area of exclusive property, large dressing room and bathroom with window on the ground floor. Upstairs there are three double bedrooms, one with another connected room that can be used as a study or additional bedroom. The property requires renovation works, such as refurbishment of the systems, replacement of fixtures, overhaul of the roof, construction of the attic on the first floor and aesthetic works for the modernization.

In one of the main streets of the city, with a high tourist flow, we offer for sale a commercial space used as an ice cream shop and yogurt shop.
The property, finely renovated in 2012, is in excellent condition and equipped with certified equipment.

In green area with all services we propose building plot of 1000 mq with possibility to realize about 1200 cubic meters. Considered the important volumes you can realize two big property of a solution for four family.

Seen the strategic position the lot is commerclially very attractive.